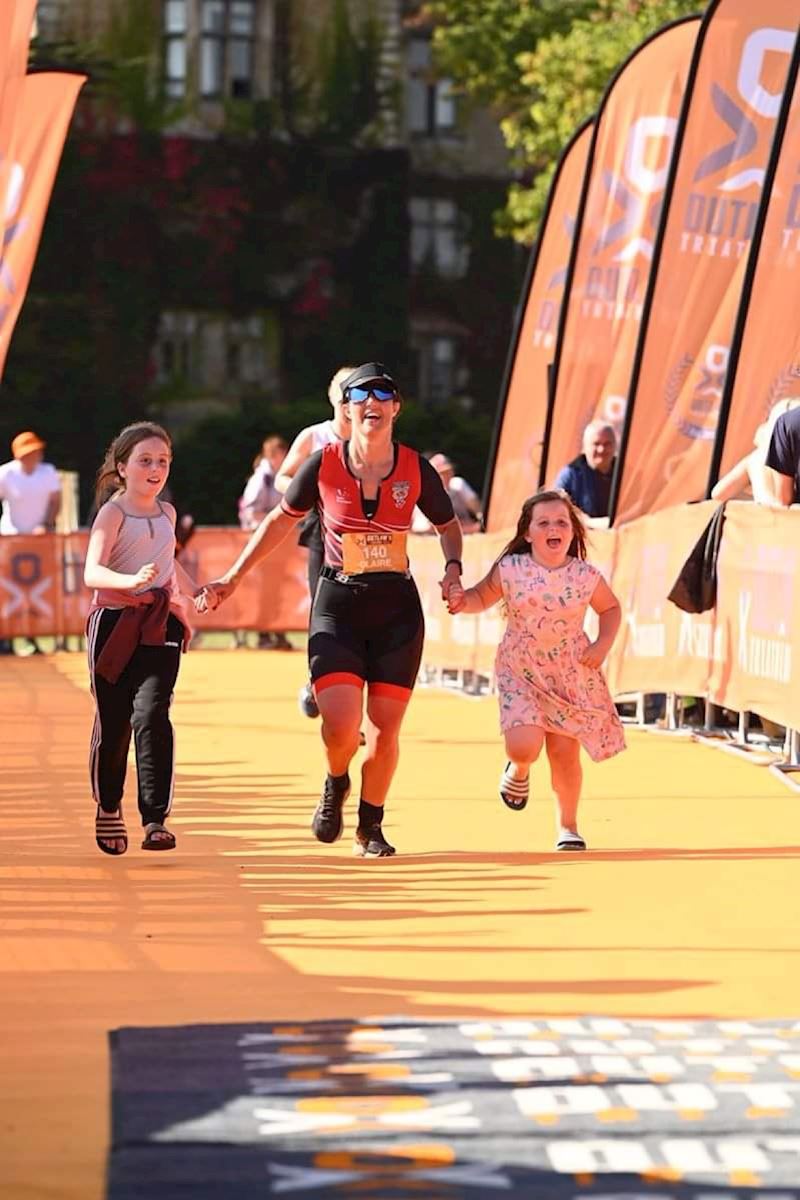 Belvoir Tri Club have been partaking in various events, near and far, over the last week. Locally, Natalie Eastaugh completed her first marathon distance running race at Rutland Water. The run passes through 26.2 miles of Rutland’s countryside, on mixed terrain, taking in spectacular views of Rutland Water and its surrounding villages. Natalie completed the course in 04:40:52, making her 19th woman home overall and 2nd in her age category. Natalie commented that she enjoyed the race, despite a tough course and torrential rain in parts. Also at Rutland, Debbie Carleton completed the half-marathon distance. Debbie managed to break the two-hour mark, coming home in 01:59:01. Debbie’s impressive performance made her 5th in her age category.

In other reservoir based sporting events, Steve Rogers completed the Grafham Water standard distance Triathlon. The event, consisting of a 1500m swim, a 36km cycle and a 10km run, uses Grafham’s clean waters for the swim, then takes in some of the most scenic villages in the area on the bike, finishing with a 5km lap course using the natural footpaths of Grafham Water. Steve completed the course in 02:54:48, making him 1st in his age group and 36th overall.

Claudette Joint and her daughter Maia tackled 100km of the Vale of Belvoir’s roads and hills, partaking in the ‘Belvoir Blast’ organised by local company 2 Wheels and a Piece of Cake. The ride is certainly a challenge, with 3,200ft of climbing in total. The pair described the ride as one of ‘two halves’ – rain and sunshine! Claudette commented that the event was ‘brilliantly organised with scrumptious cakes and savouries at the food stops.’ The duo managed to complete the course in under 5 hours.

Also in the Vale, a handful of Beavers completed the notorious Equinox24 at Belvoir Castle. Equinox24 is a 24-hour race around a mixed terrain 10k loop against the clock. There is also a daytime 10km race and a night 10km race. The event is open to all abilities: whether entering to run solo or in a team of 2-8. Each year the race is exhilarating, testing and rewarding in equal measure, with a great atmosphere. The 10km route loops around the grounds of Belvoir Castle Estate, much of it off-road, with some nasty hills thrown in for good measure. Jo Grace and Gwenda Williams represented Belvoir Tri, both running as solo entrants, however completing much of the event together. Both Jo and Gwenda completed a mammoth 70km – admirable in tough conditions. Jo said ‘I am so proud of us, it was stinking hot in the day and didn’t really cool down in the night. I struggled with nutrition and hydration, so lots to learn there. Overall I really enjoyed it, and we will be back next year to get that 100km.’ Amanda Bishop also finished 3 laps of the course as part of her training for the London Marathon. Rob Spashett, who is still building back fitness after injury, completed the 10km night race with his wife Marcela. Rob and Marcela completed the 10km course in 1:13. Rob commented that he enjoyed the race, with finishing made even sweeter due to a sought-after glow in the dark medal.

Further afield, Gina Woodward partook in the Swim Serpentine. The Children with Cancer UK Swim Serpentine is a one-day open water swimming event held in and around the beautiful Serpentine in London’s Hyde Park. Gina completed the longest distance available, the two-mile swim, in 01:31:58. Claire Giles was also down south, however firmly on land, running the Great Bristol 10km in memory of a friend. Claire’s finish time was 01:23:05.