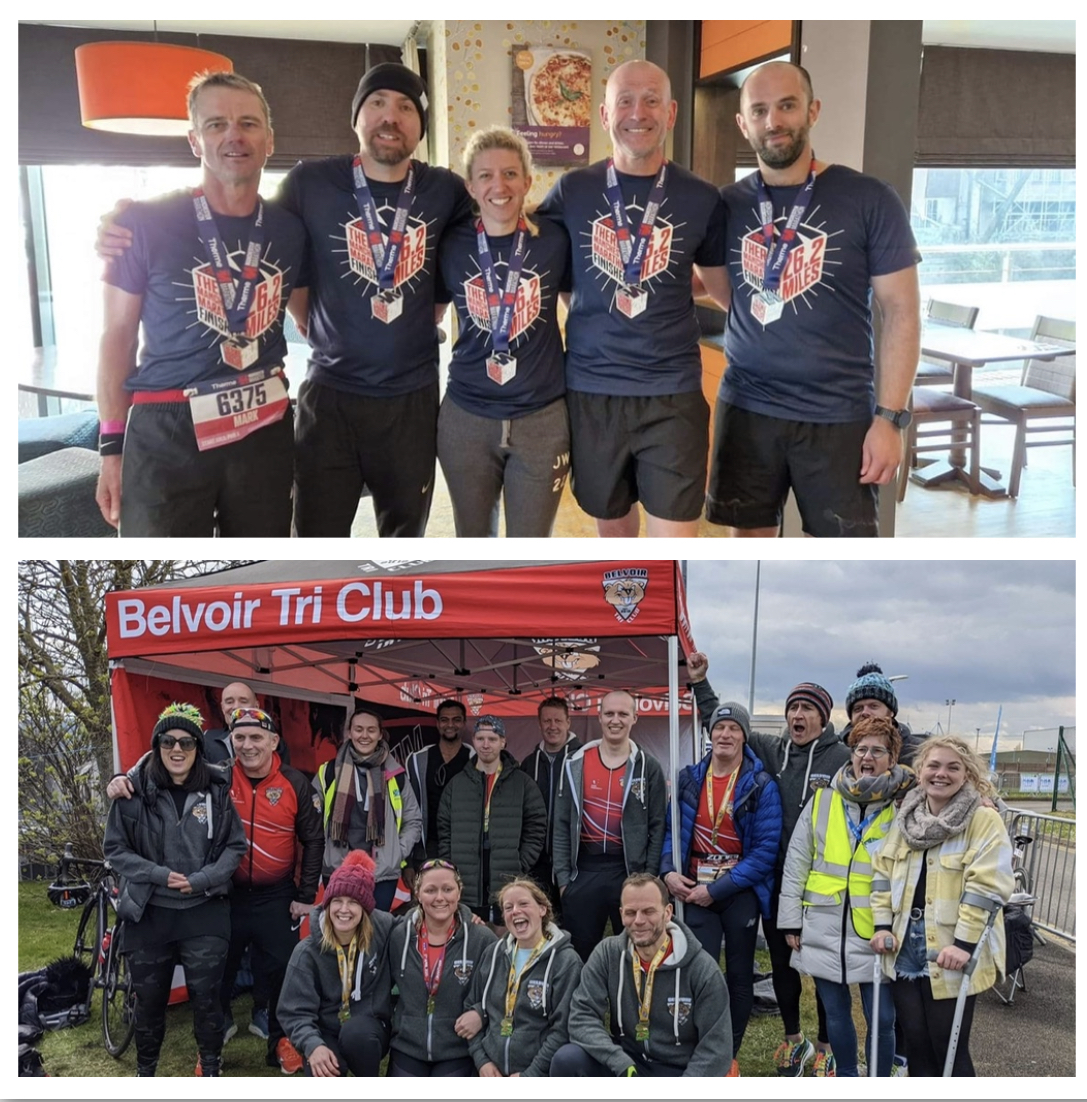 It has been a busy weekend of racing for Belvoir Tri Club, with members competing in various races both near and far. First up, Sunday 3rd April saw the welcome return of the Grantham Spring Triathlon (ran by local events company SBR) after a two year Covid-19 induced hiatus. Twenty eight members of Belvoir Tri crossed the finish line on the day, battling some challenging and chilly conditions to earn their medals.

The venue and course stayed mostly the same as the past few years, with the event being hosted at the Meres Leisure Centre. For the sprint distance that was opted for by the majority of members, a 400m swim in the leisure centre pool was the first task of the day. Due to unseasonably cold weather, some athletes took the opportunity in transition to wrap up warm for the bike, with others not wanting to lose time and braving the cold in their still-wet tri suits. The swim was followed by an undulating 16.5km two lap bike course that took competitors through the familiar territory – setting off through Barrowby, down the Drift to Harlaxton, and back into Grantham town down the A607. Once off the bike, athletes headed back into the transition area and took on their final leg of the triathlon – a 5km run of 2.5 laps. The run took athletes around parts of Grantham immediately around the leisure centre before they sprinted for the finish, their well-earned medal, and likely a burger and hot coffee.

The sprint distance triathlon also formed Belvoir Tri Club’s sprint distance club championship event, so the stakes were high for those after a coveted club trophy. Winning the club championship was Matt Broad, who was first man home in an impressive time of 1:02:25. Matt managed to cinch first place after Dean Scoffins was unceremoniously disqualified, but the less said about that the better. Matt’s target was 1 hour but he was happy with his finish time, commenting that it was great to see so many old and new members taking part. Matt’s speedy time also made him 3rd in his age category. Second home was club chairman Chris Pugh (01:04:47) followed by Dale Kitchen (01:05:13) and Paul Scott just one second behind, (01:05:14). Next was Joe Hayes (01:06:21) and Manish Hiran (01:06:22).

Slightly further afield, a handful of members took on the challenge of the Manchester Marathon, with a race report kindly being provided by Mark Angeloni. Conditions were absolutely perfect on Sunday for the marathon and some amazing results followed. First Beaver over the line smashing his personal best by nearly an hour was Nick Conboy with a time of 3:20:58, followed by Mark Wilson with a time of 3:34:20. Next in was Mark Angeloni beating his personal best by over 16 minutes and a time of 3:37:32. The next two to come in were the Beaver Ultra woman Sophie Davies 3:49:32 and marathon debutant Chris Masters 3:49:43. Next in was Edward Snowden with his great time of 4:24:40 and finally Luan Hutchinson with her time of 5:56:53. Meanwhile in sunny Bournemouth, Sophie Hunt, Karl Hunt and Martin Jolly made a last minute entry into the Bournemouth Bay 5k – Karl commented “conditions were perfect for the pan flat out and back route along Bournemouth Promenade, with all three athletes finishing together in a respectable 23:09.”