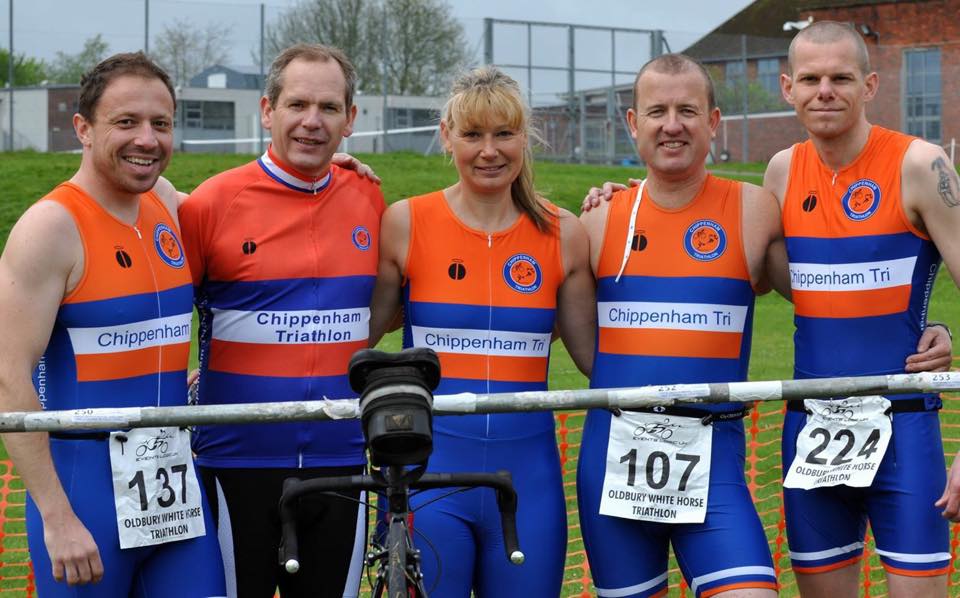 It all seems a long time ago since we shared a swim lane with Corsham ASC. I distinctly remember a cold February 2014 evening leaving the pool where we’d had only 1 triathlete amongst the 8 Corsham swimmers, down beat with the thought that perhaps establishing a triathlon club in Chippenham was a non-starter. Fast forward to September 2015, standing at the side of the ageing Colerne military pool, my mood was entirely different: 22 Chippenham Tri swimmers of all abilities, many sporting our branded orange hats, ploughing up and down 5 lanes. There was a real buzz in the air!

While the highlight has been the racing, the training and social aspects of the club have been equally important in establishing a team atmosphere, and developing the many members coming from a single discipline background (mostly running). Our weekly swim session is now well established, with around 20 swimmers regularly attending. We’ve seen some huge progress from members who could barely swim, now moving up to the fastest lanes. I’m also really pleased that Neil Perry and Peter Blake have boosted the coaching support and have agreed to attend Triathlon England coaching courses. Coaching is clearly the foundation of the developing of our club further. We must also recognize Lee Green, who helped establish the Colerne venue through his links with the military, and also led the coaching for the ‘brick’ sessions at Castle Combe. Again the brick sessions after a slow start, are certainly gathering interest. Lee has temporarily moved on following a promotion, but I look forward to welcoming him back to a strong and healthy club in a few years’ time.

In this modern age, the facebook page has been instrumental in developing the team, sharing ideas and racing plans, arranging informal training and training camps (such as Claire’s Gower gathering) and promoting social events. While some of the discussion has sailed close to the wind (the female aspects of sitting on a saddle spring to mind), I’ve only had to use my administrator sensorship rights twice!

Finally on the training side, it’s been great to see members attending both Harriers and Wheelers sessions, which of course is all part of the vision of the club. In particular it’s been fantastic to see female members from a running background take advantage of the Wheeler’s rides, gaining confidence on the bike.

As referenced earlier, the racing has been the real highlight this year, with the distinctive orange and blue kit so visible in local events, and indeed overseas. (While I mention kit, a big thank you to Belinda Stephenson for taking on the kit secretary responsibility, and establishing the online shop, and most recently Sarah Ellis for her help developing the clothing range). Thanks too, to David Moxham for his accounting skills as treasurer (making sense of my scribbles and wacky spreadsheet).

This year, thanks to Rob Field, we established our inaugural club championship, a series of local events to focus member’s participation. It’s never easy to please everyone, but I think the first year has been a success and gives us something to build on. With so many members new to triathlon, it was great to see members have the confidence to give different distances a try, and the championship was aimed to recognize such debuts. One of the highlights for me was the first race of the season – the Calne Sprint event – where we had 12 finishers, 6 of which were debuts. This was the first race we were really noticed.

After a full season of debuts, fun and achievement, congratulations to Lynsey Carpenter and Michael Bright for winning the first Chippenham Tri Championship! Both winners absolutely demonstrate the ethos of the championship, representing the club with pride, and showing massive progression through essentially their first full seasons in triathlon. Well done to all members who scored points in the championship this year.

I won’t go onto to mention all the races, but some great statistics for you:

We also saw five doh moments worth mentioning (and sharing for learning!). Remember to take your shoes off before jumping in the pool; take your swim hat and goggles off before running (during an Aquathlon), count your laps carefully (even if it’s only 5), don’t stop mid swim lane to allow competitors to pass; take care on the bike when taking drink bottles or removing shoes; and try to wait until you get in the water before ‘wetting’ your wetsuit! Several of these small errors are attributed to David Walker, who was a very worthy first winner of the golden sprocket award!

While the club ethos is all about participation, personal achievement and of course enjoyment, we do also aim to compete at the highest level. So to finish the race report with some specific highlights and achievements:

The report would not be complete without mentioning the ultimate future of triathlon in Chippenham – the Tristars! Having established the junior training sessions on a Friday, we now have a squad of over 12 keen tristars. Again some great performances at the local races (see http://www.chippenhamtri.org.uk/tristars-youth/), and a real highlight of the year, organsing our own Aquathlon at Colerne. A couple of statistics to illustrate the first year for the tristars, which I’m sure will be a foundation to a successful future:

So what does 2016 have in store? From the development of our coaching team and strengthening our training sessions, to the growth in participation races of all distances and levels. From the continued growth of the tristars club, to organizing a junior triathlon and potentially developing a junior duathlon series with DBMax.

The future looks bright, the future’s orange, and blue!