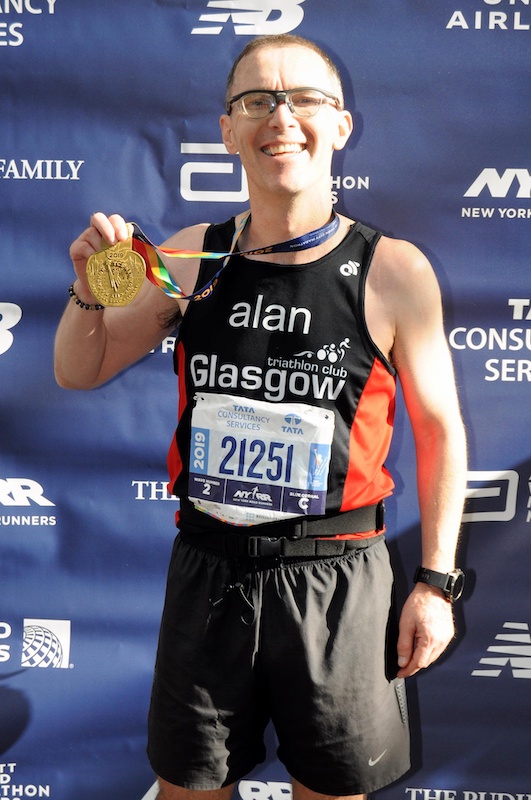 Alan Keachie has been a member of Glasgow Triathlon Club for three years. He is a business consultant and races in the age category 45 to 49.

Alan’s love of sport started with football, before progressing to triathlon. He says: “Football was my main sport from childhood. I played weekend amateur football into my 40s – and until I got bored with 18 year olds running past me.

“I then got a new lease of life when I started playing veterans’ football when I lived in Germany.

“I haven’t really played much football since moving back to Scotland and I do more running and triathlon training now, although I haven’t hung up my boots yet.”

It was running and “some leisure cycling” that gave Alan the motivation to get into triathlon.

He says: “I like the multi-sport element of triathlon and the fact that you can mix up the training. I am also really enjoying the learning curve as I do more of it.”

While running is Alan’s favourite triathlon discipline because, he says, “I’m in my comfort zone with running”, to his surprise he looks forward to swim training these days.

He says: “I used to dread the swim sessions when I started with GTC. At that time, the thought of me swimming 400 metres without stopping was incomprehensible. But I actually enjoy it now.”

Swimming and running have been the sports in which Alan has seen most improvement since joining the club. He says: “I’ve benefited enormously from the GTC’s coached sessions at the Western Baths, Maryhill and Pinkston.

“I’ve also learned a lot about running, which has helped me to get faster.”

Although Alan has not completed many triathlon races, he is keen to become more competitive over the sprint distance. He adds: “I am specifically looking at aquathlon races, which don’t have a bike leg!”

Over the years of playing sport, Alan points to a number of proud moments. He says: “Playing football at Motherwell FC’s Fir Park stadium in 2013 – for 20 minutes until I pulled my hamstring – is something I won’t forget. I also hit the target I’d trained for at the New York City Marathon in 2019.

He adds: “I get huge satisfaction from setting a goal, then meeting it, whether it’s a training session or a race. The occasions when this happens make up for those when it doesn’t.”

Alan has a few goals on the horizon, including the Berlin Marathon this weekend. He says: “I want to finish with a smile on my face, as opposed to a grimace.

“Beyond that I plan to enter more races to build my triathlon experience. I’ve registered my time from the summer’s sprint aquathlon race to try to qualify for the GB age group team for next year’s European Championships. However, there aren’t too many spaces still up for grabs and I might not make it.”

Looking to the future, Alan has a simple hope. He says: “I want to try to keep going for as long as I can, provided I still enjoy triathlon and sport. I’ve had arthritis in my feet for a few years, but in the last few months it has started to become more noticeable when I run. I’ll need to learn how to manage that.”

Join a club. GTC is a very friendly and inclusive club, and I love training together with people who have a variety of goals.

Take advantage of the coached sessions.

Practice transition. (One of these days I might take heed of this tip myself!)