“This is how we did it”- Ironmen Mike, Richard and Sean relive their Bolton race

Ironman Bolton is reckoned to be one of the toughest of the “full distance” events.

It requires months of preparation for many hours each week, it’s expensive, it begins at 6am and finishes long after 6pm – and all to cycle and run around the potholed streets and moors of a Lancashire town.

Yet hearing the finishing line words: “You are an Ironman” as athletes cross the line makes it all worthwhile. 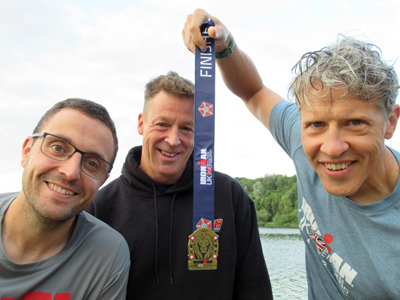 Sean: I had recently got into the sport and I wanted an added challenge, but I think I may have under-estimated it a bit!

Mike: Four years ago my wife Louise was on holiday in Tenby and saw this amazing event which was Ironman Wales. I said that looked like a good challenge and she said to me: “Don’t be ridiculous, you couldn’t do anything like that.” I hadn’t done anything like that before, I didn’t do the triathlon sports, but I set myself a challenge.

Richard: I have done four or five half-distance events. I got five hours, 15 minutes in one of them and I thought I wouldn’t do better than that, so I wanted a fresh challenge. It’s twice the distance, but it feels significantly longer. I have to say I went for the Ironman brand because I wanted to be an Ironman.

Sean: I was doing about 10 to 12 hours a week – for many months – and of course the event was delayed a whole year too. It’s important to stay consistent.

Mike: I trained twice a day during the week - swimming, and bike rides. Then long bike rides and swims at the weekend.  I have a long-term injury that means I can’t run as much as I need to – which caught up with me on the last lap of the marathon.

Richard: I was training up to six sessions a week and taking one rest day. I tried to incorporate as much as I could around work and family, for example swimming at the same time as my daughter’s swimming and running to work once a week. I did two pool swims a week, plus open water; an interval session on the turbo and longer rides with the club; and two or three runs a week including one brick run.

Did it live up to expectations?

Sean: I enjoyed the whole day. The support was amazing – it makes you feel like you are a proper, professional, athlete. In particular there is a climb on the cycle leg by the Black Dog pub where it is like the Tour de France with fans lining the road.

Mike: It was extremely well organised, but also extremely challenging. In particular when the rain started it was torrential, there was debris running down the road and water coming up from the roadside grids. I slowed down to be safe and I think that helped me get through it. It was as hard as I thought it was going to be.

Richard: Ironman have got the atmosphere absolutely nailed. Watching the professionals go off first, going into the water to AC/DC and being cheered up the hill by members of Warrington Tri Club dressed as Oompah Lumpahs – the spectators were absolutely amazing. You couldn’t do it without the crowds.

Your moment of the race?

Sean: It has to be finishing. It was gone 9.30pm for me. It’s just a massive sense of overwhelming pride. And being there with my family and friends, it was just great.

Mike: It’s the finish. All the training, all the miles, all the times I cycled up the hills around Flash and Buxton, in the sleet and the rain – it was all part of a process to get there. So the finish capped it all.

Richard: The finish also. Having my teenage boys and Harriet there, my wife Maria and seeing Matt and Luke from the club at the end – it gives you such a lift.

All three: We’d like to thank the club coaches for their encouragement and technical advice and our families for their support. We are proud to wear the NTC top.