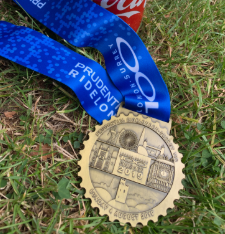 After getting little or no sleep on Saturday, I was up eating toast, which was not going down well at 5:00 am on Sunday morning.  I rode from my hotel, the Excel Travel Lodge to meet up with lots of other riders all heading the same way.  The 5-mile ride was a bit surreal – the sun was coming up and around every corner more and more riders appeared.   The signs were clear and easy to follow and I was in my start pen with plenty of time to spare for my 7:08 – Black B wave start time.  I chatted with a bunch of guys who were all cycling for the same charity as me – Children with Cancer that was.  It was good banter and lots of chat about the adventure that was ahead of us, many had done it before and it was good to hear their experiences.

The wave crept towards the start line and we all set off bang on time.  I soon found myself riding in loads of space at high speed.  I was careful not to go off to quick, there was a long way to go and I did not want to burn myself out.  The first few miles were about getting into the right pace.   I have to say the first 20 miles were amazing, riding through central London on wide flat roads. I was passing riders and riders were passing me and all was done very safely.

Riding through Richmond Park was a treat. A. nice road with some gentle humps. The first hub (pitstop) was ahead.  Here, some rider’s lack of experience started to show.  Usual practice of passing on the right needed to be closely observed as the exit to the hub was on the right.  Lots of slow riders were darting across the road to enter and leave, so extra care was needed.  Here I witnessed a crash - the guy ahead of me overlapped his front wheel with the back wheel of the guy in front of him.  A swerve and clash resulted in a fall.  The only lucky thing was this all happened in front of the hubs first aid tent. I looked back and all seemed ok so I carried on and the guy was soon on his feet again.

Soon I was crossing the M25 and I realised that London was far behind me, next the Surrey hills. I approached Newlands feeling good and looking forward to a few climbs (which is not like me).  Soon it was Leith Hill, not much of a hill compared to the ones on our doorstep, down into Dorking and then time to get ready for the much-feared Box Hill and Zig Zag road approach.  Again, compared to our training ground not much of a challenge although there were lots of people walking.

Soon I was passing Leatherhead and heading back over the M25.  My thoughts now focused on the distance covered - 75 miles done and heading back into London.  Time to see the big crowds. Kingston upon Thames put on a great show and then into Wimbledon, an equally impressive turn out.  The two towns did introduce some delays.  The three distances merged (19, 49 and the 100) putting more riders on the road and stops were introduced to allow people to cross. Just after the stops I got a bit of cramp, which I managed to stretch out without getting off the bike.

Crossing Putney Bridge was a clear indication that I was not far from the finish line. I scrabbled around for a few jelly beans, finished the last of my water and dug deep against the wind to be sure I was strong to the finish.  Hugging the Thames to Westminster then turning past Westminster Abbey and heading up Horse Guards Parade, I knew the end was just around the corner.  Onto the Mall, I sat up, soaked in the atmosphere and crossed the finish line.

100 miles done - official time 5hrs and 17mins - Got my medal, refilled my water bottles and headed to the charity hospitality area.  More drink, a bit of food, a chat with other riders and then planned my 10-mile ride back to the hotel on the busy roads of London.

Overall it was a great morning’s ride.  Support from the side of the road was always amazing and the marshalls were brilliant.