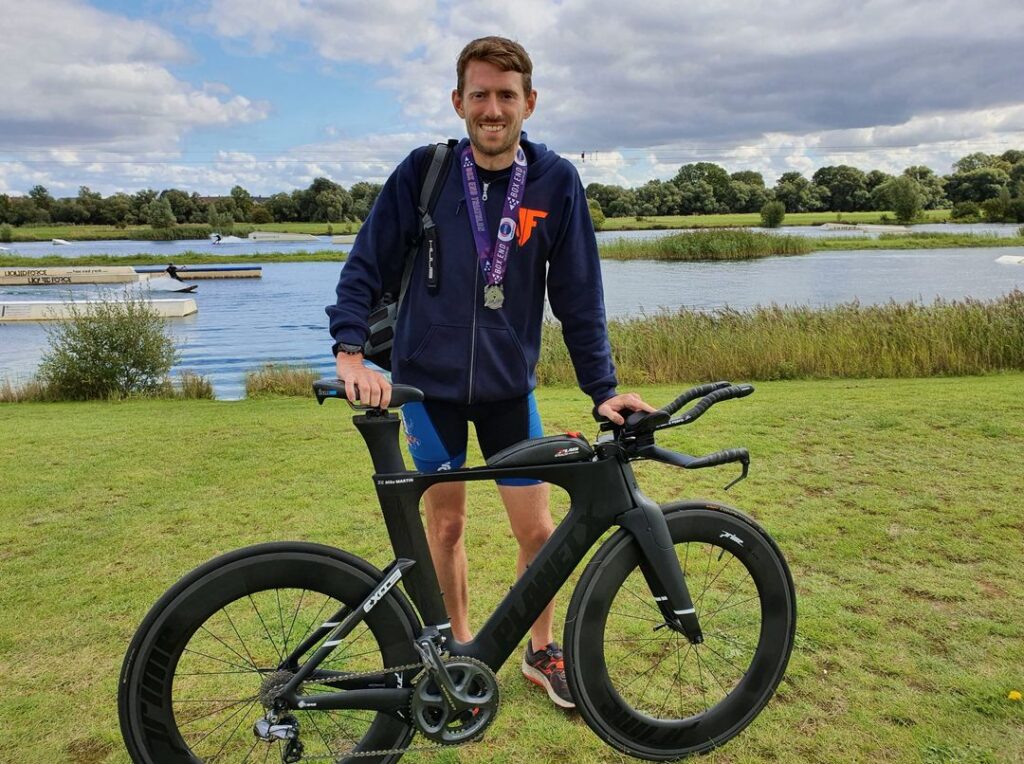 Its seems like ages since I have done a ‘proper’ Triathlon. In fact it was October last year. Seeing as this could be the only one I get to do this year I jumped at the chance. I hadn’t been to Box end before but luckily I marshalled for the standard on Saturday, so had a chance to have a good look around and drive the bike course. On arriving to be honest everything seemed pretty normal, you wouldn’t think anything had changed. Registration and racking were quick and easy and even the toilet queue was pretty quick. I did make the schoolboy error of forgetting something to wear on my feet whilst waiting for the swim start, the ground was wet and my feet were freezing from walking around bear foot. It was great to see some many Tri-Force guys around. The start was pretty straight forward. Everyone waited in a holding pen until getting called forward in number order (based on estimated swim time).  As I’m a slower swimmer I guess I will have to start getting used to starting further back. There was a chance for people to get in for a couple of minutes and then swim a short distance out to the starter in a kayak. Everyone was set off about 20 seconds apart. I had a good start and managed to catch the person in front but managed to get boxed in and swimming into a couple of underwater buoys on the ski jumps. After that the rest of the 750m swim was pretty lonely. Transition went pretty smoothly, except for accidentally pausing my watch instead of pressing the lap button. Onto the bike I quickly started to catch and overtake people. The route was pretty flat. The first part was on quiet roads, the middle section was through a couple of villages with a few roundabouts and the last section was wide open roads. There was plenty of chance to keep the speed on and see how many places I could make up. Through T2 with no issues and onto the run. The run was a cross county 5km which started off pretty flat across the fields until reaching the opposite end of the lake. The route then snaked around and up and down some short sharp hills. To be honest it was pretty fun. I finally managed to catch Ruth Kent  and Julianne Nightingale  in this bit. I had set myself a target at the start to try and catch them after starting about 30 odd positions behind. After that it was back across the flat fields into the finish. Finished 32rd which I was pretty chuffed with considering there seemed to be a lot of fast looking guys in the start area. The whole race set up by James Shipley and his team at ATW was brilliant. During the race everyone was spread out nicely and most importantly it felt safe. Great work guys. Well done to everyone who raced especially Jon Reilly who smashed it. Also to the people who stepped up to marshal.