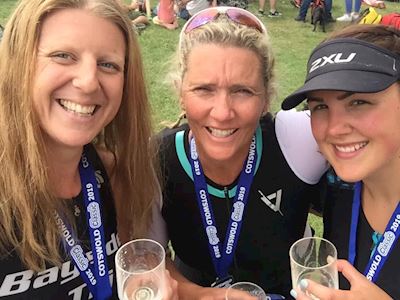 I’m going to start by saying why I would not (ever!) join Bayside Tri, or in fact any triathlon club for that matter. Well at least why I thought I wouldn’t…

Firstly, the minor detail that one third of triathlon involves running. I am quite possibly the slowest runner ever. I never wanted to run in the first place (understatement!) but, having two young children, I followed couch to 5k on and off through the first half of 2018 as something I could do to be active that took up the least time possible.  Turned out I managed to complete Couch to 5k and actually wanted to continue with the running, albeit at my own snail pace. Still not remotely triathlete-worthy though (I say that as if it was something that had crossed my mind and that I was considering – it hadn’t AT ALL, and I wasn’t AT ALL!)

A minor heel injury at the end of summer 2018 meant no running so I picked up swimming for a few weeks to keep doing something and remembered how much I loved it. I could only swim breaststroke though, and nobody had ever shown me how to do it properly. Again, nowhere near at the stage of even thinking about anything Tri related.

Apart from being the world’s slowest and most reluctant runner and only being able to swim breaststroke, another minor detail was that the other third of triathlon is cycling – I had been unable to ride a bike for the past 8 years and thought I probably never would again. Except that in November with the go ahead from my chiropractor I finally braved giving it a go and it was fine. Well, I say “fine.” I was “fine” and not broken by the riding itself, what it actually was, was AMAZING. I was absolutely over the moon to be back on my two wheels and still am. That was on my mountain bike, I had never had a road bike and had no intention of getting one, or doing silly unnecessary things like going near any hills for that matter. Just blown away to be pootling about on my old bike again.

It was then pointed out to me by a friend who happens to be a Bayside member that now I was doing all three I really ought to just string them together and do Tri stuff.

I never laughed so hard in my life.

I will confess that I only really joined for the weekly swim sessions. After a chance conversation at the pool in Fareham one day in October with a friendly stranger (who turned out to be a Bayside Tri member, they get everywhere!) I was inspired to try front crawl, even though I was convinced I would have to actually stop for every breath because I just couldn’t without getting a lungful of water. A couple of weeks later I was doing it and somehow swimming 2000m crawl without drowning myself! But I wanted something better than the wonders of YouTube to help me with it before I got too far into bad habits. So that’s where the Bayside Tri coached swim sessions came in. I went along to the last session before the Christmas break to try it and see what goes on and thoroughly enjoyed the swim, coaching and company.

As for all the rest that Bayside Tri has to offer in terms of coached run sessions and group bike rides, I had never run or cycled together with anyone else before and didn’t think I particularly wanted to – I am a people person but I mostly just tolerate running and don’t need an audience for that thanks very much, and I’m loving just being on my bike at all and happy doing my own thing along the little lanes of the Meon Valley where I live. Having said all that… I just went to my first parkrun in Fareham today, spurred on by the new “Bayside on Tour” idea which entails club members visiting a different parkrun together on the first weekend of every month. I totally loved it especially being there together with so many from Bayside Tri, many of whom I am getting to know after just a few short weeks, but I also surprised myself by enjoying the running amongst all the other parkrunners. Definitely something I will be doing more of. I’m also looking forward to joining in the next ride that looks like my kind of pace and distance, which isn’t something I was expecting to say.

I had imagined the whole club thing to be a little “proper” and intimidating but with the ethos “friendship, commitment, endeavour” really showing through in everything I read about the club and everything people said about it when I spoke to them, I felt encouraged to give it a go and join anyway.

There are plenty of members who are the polar opposite to me, training for Ironman or having completed several already and many other things besides, and the club clearly has plenty to offer them too. But they are not in some separate unspoken league within the club; they are the people  kindly offering me advice on my first triathlons because that was them a year or two ago, stopping for a chat at the end of swimming just because, looping back round at the end of parkrun to support those still going and cheering everyone on. I have been a member for just a few short weeks and already I can see it is like one big family and here for whatever it is that each individual hopes to get from the club, whilst giving back at the same time whether that be by volunteering time to help run the club and events or by being supportive to other members along the way.

So all in all triathlon stuff was, in my mind, very much something “other people” did. In fact it still is, and yet here I am doing it! I actually do not recognise myself right now. I have just signed up for the South East Series which for me involves Sprint Distance at Hart and Fareham in May, followed by Olympic Distance in July. They are all pool-based swims but I am also considering Chichester Lake Triathlon in June – eeek! There has been zero pressure to sign up to events and all the support and encouragement I could ask for.

I feel like I’m getting to know lots of people already and they have all been so friendly and welcoming. Added to which, I am not the only new member and that means suddenly I feel I am also one of the friendly, welcoming people for others which feels good and like I am part of it all already rather than the imposter I thought I would be.

So my message is if you are on the fence about joining, feeling like you might be out of place or not good enough or whatever else may be stopping you… go for it, you’ll be glad you did. Just come along to meet people and see what goes on.

Can you tell, I think I may have got the bug – for all things triathlon, and specifically for my club, Bayside Tri!