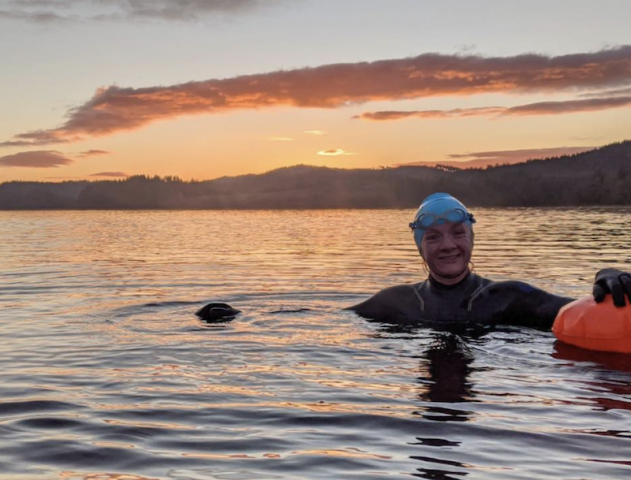 Glasgow Triathlon Club member Dawn Hunter was surprised but delighted to win The Beltie Triathlon at Crossmichael, near Castle Douglas in Dumfries & Galloway, earlier this month. It was a middle distance triathlon, with a 1930m swim, 90km cycle and a 21.1km run. She finished in 06:00:15 and was fourth overall.

It was her second time on the course. Dawn, 35, who has been with GTC since 2017, said: “Last time, I won by default of being only one of two females, so I am very pleased to have won properly this time, although there were still only four females.

“I was really surprised to win because I was sure I had been overtaken on the bike by another woman. It turns out that, she was part of a relay team.”

Dawn described the course as “absolutely stunning”. Ordinarily, with a triathlon, she dreads the swim, enjoys the cycle and pushes the run. In the Beltie, she enjoyed the swim, pushed the cycle and endured the run. She said: “I like this race for turning my expectations and weaknesses around.”

She added: “The swim is a double lap in a very sheltered loch – actually, a very slow moving damned river. It’s a beautiful swim and, due to the small number of competitors, it is very relaxed with none of the bashing around you find in bigger events.

“The bike is mostly flat so is quite a fast course, on lovely tarmac and quiet roads in beautiful countryside. It is easy to just sit back and enjoy it.

“In 2019, the bike section was in torrential rain and I was wetter cycling than I had been on the swim, but this time the weather was perfect with light winds and bright skies.

“However, the run was designed by Satan! It is quite deceptive and on paper it looks like one small climb per lap. In reality, it is an energy sapping climb followed by undulating country roads.

“Last time, I was gutted by my slow run time and how badly I felt I had done. This time I had more appreciation of the course and instead I enjoyed it. I was slightly slower on the run but that was because I kept stopping to eat juicy blackberries from the bushes.

“As I said to John, one of the organisers, when I finished, although I’m pleased to have improved my overall time I am much more excited by the fact I came over the finish line smiling.”

Dawn was also impressed by the medal and refreshments after the event. She said: “The medal is a chocolate cow and the cake spread after the event is amazing. There is nothing better than finishing a middle distance to some homemade ginger loaf and a cup of coffee.”

Two other GTC members, Fiona Roberts and Ruth McKelvie took part in The Wee Beltie. Fiona was second in her female vets age category, while Ruth was sixth in the female seniors.

This was Dawn’s third race of the year. She took part in the Starman Night Triathlon three weeks prior to The Beltie where she finished fourth female. In July, she competed in the St Mary’s Loch Triathlon.