Between the 29th June and the 19th July members of Bayside Tri Club were taking on the latest in a series of club team challenges.

Our efforts turned to swimming for this challenge and getting back into the open water.

Split into teams of 5 each team member had to swim a total of 2.5 miles during the time period of the challenge. This could be done in one go or in multiple attempts, with the aggregate time for the 2.5 mile swim counting towards the team total. The team with the lowest aggregate time would be the winners.

This challenge was a great opportunity to get the wetsuit out (the more insane amongst the club did it in skins) and get back into the water. Some took it as a challenge to swim the distance in one go and for many it was their longest swim to date. Others used it as an excuse to get back into open water swimming and complete the challenge over multiple attempts.

As well as swimming in the Solent, club members also swam at the lakes at Eastleigh and Ellingham and the River Hamble. The Solent can be quite challenging, with a strong ish tide, so the lakes and river were great alternatives.

The imaginatively named 'Team 6' were the winners, with a very respective combined time of 6 hours 13 minutes and 28 seconds.

The fastest time was 51 minutes and 16 seconds and the average time, from all those that finished, was 01:28:19 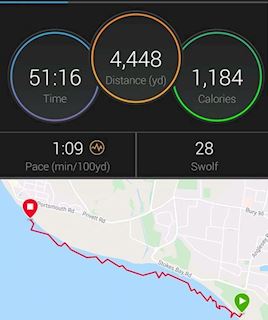