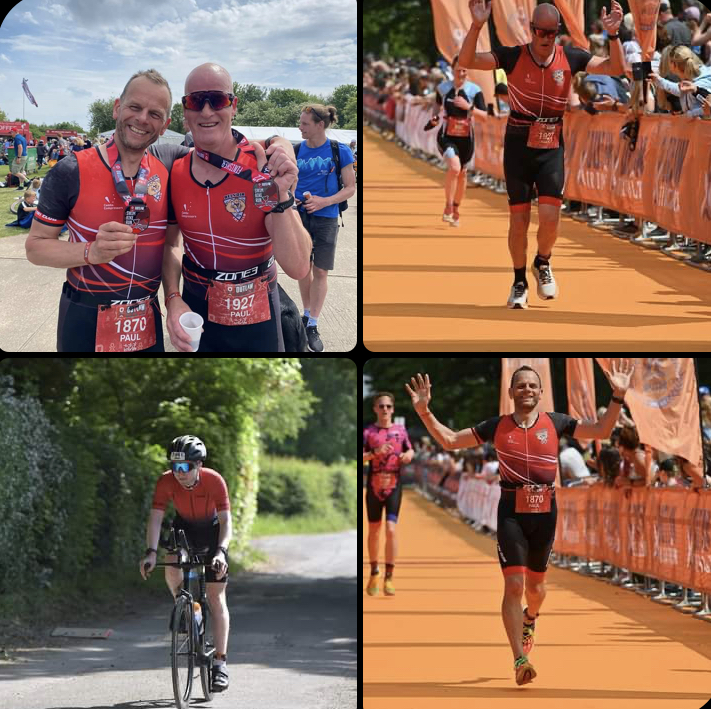 It was a rather drizzly start to this weekend’s triathlon racing – but that didn't dampen the spirits of the members of Belvoir Tri Club that were being put through their paces at a number of local events. Firstly, three athletes tackled the course at Holme Pierrepont’s National Water Sports Centre. The standard-distance 70.3 mile triathlon is hosted by Outlaw Triathlon and comprises of a 1.2 mile swim, a 56 mile bike, and a 13.1 mile run to really finish off the legs. The swim takes place in the Regatta Lake – a single out and back course. From this, competitors embark on a single-loop bike course through the beautiful Nottinghamshire countryside. By this point, the rain had cleared and been replaced with near-perfect bike conditions – cloud cover and not much wind. After dismounting the bike, athletes embark on a fairly flat run around the Regatta Lake and River Trent path. However, runners found that the welcome cloud cover of the bike leg was a thing of the past, the sun was well and truly shining, making the run even more of a challenge. Thankfully, Belvoir Tri Club were out in force to cheer along all the competitors, with the club manning the bike feed station at mile 32 of the course. Volunteers from the club handed out a vast array of nutrition provided by Outlaw to athletes to ensure they all finished strong.

First home of the solo competitors was Paul Scott, crossing the finish line in a very impressive 5:18:23. This also meant that Paul achieved 8th in his age group. Paul found the run to be the toughest part of the day but did comment that it was great to have so many family members and friends there to cheer him on. Second back was Paul Smith, who finished in 5:46:31. A smashing time made even more extraordinary when Paul revealed that he completed the whole swim with no goggles, due to him losing them in a slightly over-enthusiastic dive on the start line. The ‘Two Pauls’, as they are often affectionately referred to in the club, have been working up to their first 70.3 distance triathlon for a while, competing in sprint distance triathlons and taking full advantage of the many club training sessions, completing much of their preparation as a duo. Also competing, as part of relay team ‘Scrambled Legs’, was Joe Hayes with his dad Neil. The team posted an impressive combined time of 5:09:04 – with Joe completing the swim in 39:11, followed by a very speedy bike leg in 2:35:29. Neil took over for the run, completing the 13.1 mile course in a rapid 01:47:23.

Also competing this weekend was Wendi Carrington, who completed the Newark Castle 100 – a cycle sportive covering over 100 miles through Newark, Ruskington, Heckington, Irnham, Ancaster and Long Bennington. Claire Armstrong has also been achieving epic things on two wheels recently, completing the King Alfred’s Way 350km bikepacking route – bikepacking being the act of riding your bike for more than one day with all your kit strapped to your bike. The route starts and ends in Winchester where King Alfred is buried, and connects iconic monuments including Stonehenge, Avebury stone circle, Iron Age hill forts, Farnham Castle, and Winchester and Salisbury Cathedrals. Alongside this, more club members have been achieving the unthinkable, with Nick Conboy and Mark Berry completing the Copper Skytrail at Mount Snowdon – a 15 mile run race with, wait for it, over 5,750ft of elevation. This run is known as being the perfect introduction to skyrunning -  the sport of mountain running up to or exceeding 2,000 metres where the minimum average incline is 6% over the total distance and at least 5% has an incline of 30% or more. Nick and Mark both commented that this is the hardest thing either of them have ever done, but they lived to tell the tale, an epic achievement.

Belvoir Tri Club were again well represented at the recent Skegness Triathlon, with seven members competing in the sprint distance event. First to cross the finish line was Matt Broad, in a very impressive 01:02:09. This made Matt 8th male overall and 2nd in his age group – a great performance to be proud of. Following him was Mark Awcock (01:15:45) and then Elizabeth Daniels (01:19:35). Next up was Steve Rogers (01:21:33), followed shortly by Stephen Gabbutt (01:22:08), Claire Giles (01:35:44) and Scott Temprell (01:40:14). Holly Durham and Penny Durham completed the Aquathlon event, crossing the finish line in 33:31 and 34:16 respectively, making them first and second in their age group.