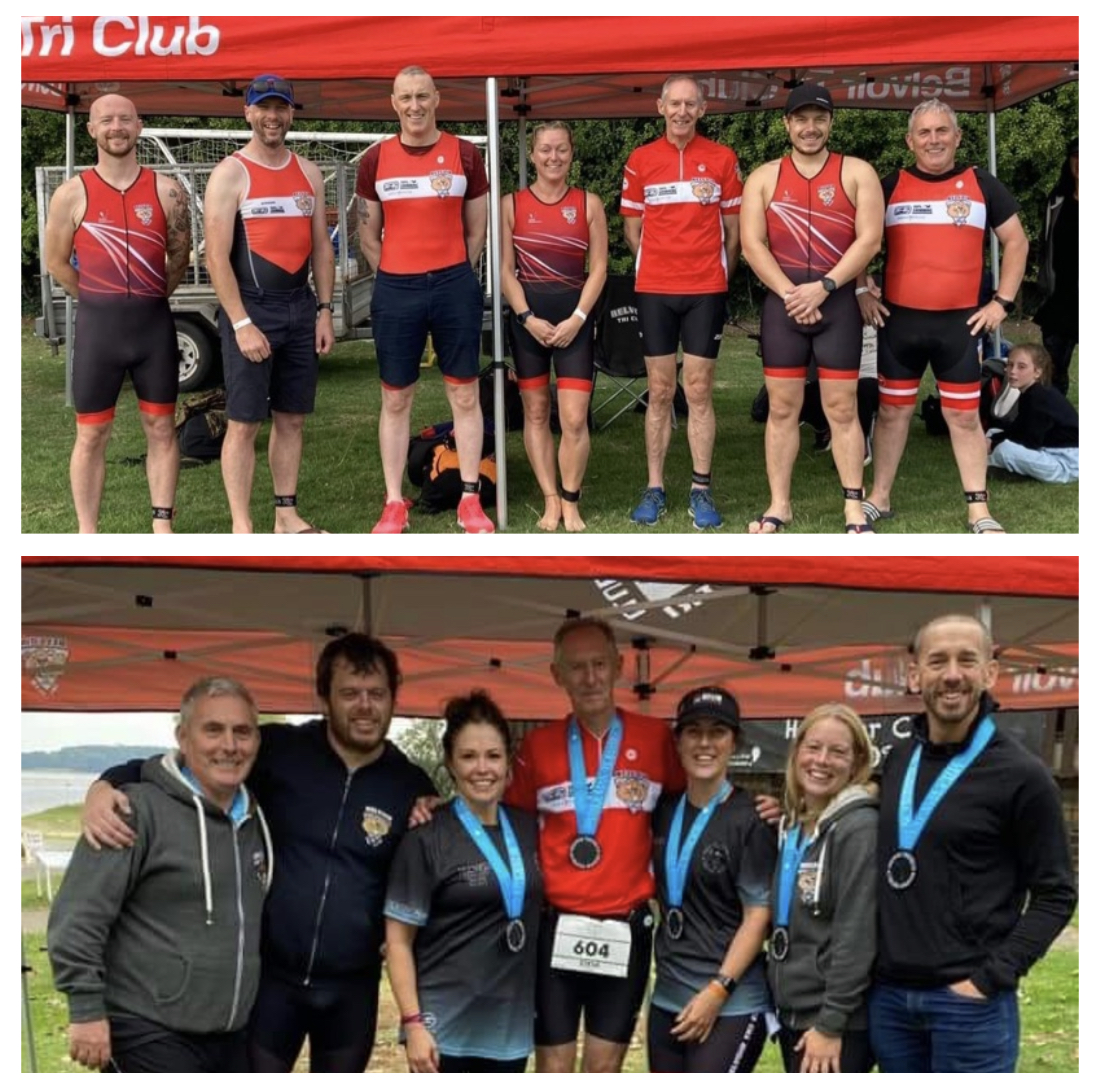 As the triathlon season winds to a close for another year, the members of Belvoir Tri Club have shown no signs of slowing down, getting another busy few weeks of racing under their belt. Most recently, members took place in the local Vitruvian Triathlon – a classic middle distance triathlon consisting of a 1.2 mile swim, a 52 mile bike and a 13.1 mile run to finish off. The event is located on Rutland Water, making good use of the reservoir and surrounding local countryside. The race had the added pressure of being Belvoir Tri’s middle distance club championship event, so it was all to play for. For the ladies title, Claire Grieves took the 1st place club championship trophy, with Kate Dewar coming in second. Bohdan Dawyd was first man, making him male club champion. Following him were Darren Joint and Steve Rogers. Scott Temprell, Tom Dean and Claire Campbell. It was a tough challenge for all the athletes, with Steve commenting that he was “so pleased to have completed it. It was never about the time, just finishing was the goal.” Tom Dean made an emotional return to middle distance triathlon, saying of his achievement “it took so much to get to the start line, it's been a hell of a 4 years but here I am back at the finish line, I could not be happier, and to have my children at the finish meant the world!”

Another recent local event was the Belvoir Castle Triathlon, back after a long hiatus and now under the management of Endorphin Sport. There were a variety of distances on offer, with Manish Hiran completing the Olympic distance race, making it across the finish in a speedy 02:52:52, making him 5th in his age group. Laura Kettle raced the same distance, finishing in an impressive 03:12:39, making her 4th in her age group. Lewis Wallace chose the sprint distance, crossing the line in 01:30:13, 3rd in his age group.

Louth Triathlon was the stage of the club aquabike championship. There was strong competition from the outset, with Karl Hunt cinching the male club championship win in 48:54. He was followed swiftly by Rob Spashett in 49:53. This made both men 2nd and 3rd place in the overall race. Steve Rogers came home in 59:06, followed by Scott Temprell in 01:04:31. In the women’s race, Verity Miles crossed the finish line in 53:06, winning the female club championship race. She was followed by Lisa Udall in 54:20. Both ladies achieved an impressive overall top 10 finish, with Verity and Lisa coming 1st and 2nd in their age group category. Belvoir Tri also had members competing in the sprint triathlon, with Dale Kitchen crossing the line in 01:18:00, making him 9th in his age group. Mark Awcock followed in 01:26:13; then Elizabeth Daniels 01:31:23; Debbie Carleton 01:33:38; Stephen Gabbutt 01:35:28; and Claire Giles in 01:48:50

Further afield, Belvoir Tri Club had members proudly racing at the famous Great North Run. Laura Kettle was particularly pleased as she ran a superb personal best across the half marathon distance, making it home in an impressive 01:47:34. Following Laura was Stephen Daniels, who came home in 2:06:05, just before Stephen Gabbutt who ran a commendable 02:15:01. All runners had nothing but positive things to say about the iconic race – the largest half marathon in the world.

Finally, club chairman Chris Pugh was joined by father and son duo Neil and Dom Dowsett on a European adventure to race the Copenhagen Ironman. A formidable challenge of a 2.4 mile swim, 112 mile bike and 26.1 mile run. Chris commented that the race was ‘everything I’d hoped for and more…it’s been an epic three year journey with the title ‘you are an Ironman’ at the end.’ Neil Dowsett stormed home in 10:52:59, followed by Chris in 12:03:17, and then Dom in 13:30:24. An incredible achievement by all.