Peter had won the drawing of lots for the place in the event that is provided by England Athletics each year, while Karen had waited three years since winning her place in the open ballot.

Peter says: “It is a nice scenery marathon where people are cheering all the way along. My running was OK until 15km. After that I had a problem with my stomach so I had to slow down. Marathon is always hard and I am proud I had opportunity to do it eleventh time in my life.”

My marathon journey started in October 2019 when I found out that I had been given a ballot place. Having done most of the way through the training, covid put a stop to the April 2020 event. I elected to defer to October 2022 and having had trouble with injuries in the interim it was with a sense of disbelief that I found myself actually on the start line.

Transport problems due the rail strikes added some extra stress at the last minute as I needed to make sure that I could pick my number up from the Excel in London prior the race.  No number = no race and it was not an option to be unable to run for this reason.
So I travelled down to London on the Friday, picked my number up on Saturday and was ready to run. 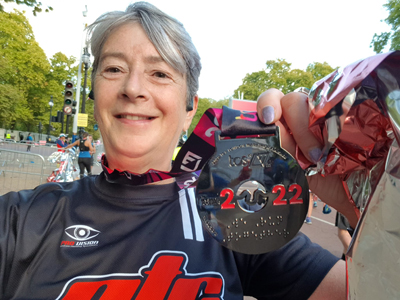 I found the summer training in the heat quite difficult to get to grips with, so was looking forward to a run in cooler October temperatures. The forecast was for heavy rain showers – not ideal but hopefully nice and cool. As it turned out the day dawned out bright and sunny and very warm at times so those hard training miles were perfect preparation.

Pretty much everything about the day exceeded my expectations. I was in Red Wave 12 starting in Greenwich Park so the morning started with a ride on the DLR then a walk of about 15 minutes to the start area. I knew that I would just need to follow everyone else but was totally blown away by just how many hundreds of people there were spread across the road as we made our way nervously to the start.

Once there it was just a matter of finding the right one in the long queue of lorries to hand in my  bag of things I might want at the finish. Then to join the lengthy toilet queue giving plenty of time to chat and share stories with other runners.  After that there was time to meet fellow members of our Red Wave 12 WhatsApp group and put faces to names.

Then it was finally time to make our way to our starting pen and after a short wait for the earlier waves it was at last our turn to walk to the start and then we were off!
The waves meant that the start was not too crowded and the level of support from the very beginning was fantastic. After about 3 miles we merged with the blue waves and we were finally all together.

The first 10 miles seemed to go by in a flash, then thoughts were on reaching the iconic Tower Bridge at around halfway.  The temperature had risen by this point so it was important to make use of all the hydration stops and put into place everything I had learned in training.  The last 1.5 miles were the hardest, my feet were tired and my hips were stiff but turning in front of the Houses of Parliament the end was nearly in sight. Finally the turn into the Mall and it literally was in sight and before I knew it I was over the line and being handed my fabulous medal with a tear in my eye.

Highlights of the day:

Would I do it again? No

Am I glad I did it? Without a doubt absolutely YES!