Here Julia shares her experience of the race.

Having raced the previous weekend I was undecided about the decision to race at Tatton Park on Sunday.

It was posted as a fast undulating course and my recovery from Eton Dorney 15k had been surprisingly good so having trained well for a similar distance I lined up in the sub 1:27 wave at 9am.

I was targeting another NSRRA record, previously held by international runner Elaine Statham at 1:31:10, set some 20 years ago.

It was lovely to see Jenny Gibbs and and Toby Hart at the start line and we all appeared equally excited to be back racing after such a long Covid period.

The event was exceptionally well organised, with social distancing and safety being the number one priority and staggered starts but with chip timing for accurate results.

I was in the first (red) wave and many runners seemed to set off very fast which alarmed me slightly but I stuck to my plan of trying to run inside 6:25 minute miles and giving other runners a wide berth of 2m.

Toby came flying past me quite early on in the race (he had been in a later wave and was clearly on for a very fast time.)

The course was similar to the Tatton 10k course, but two laps instead of one.

I realised during the race how badly I run off road as there were several sections of gravel/field running where my pace dropped but fortunately I still had enough in the tank to pick the pace back up on the well surfaced paths around Tatton Park - a very scenic environment. 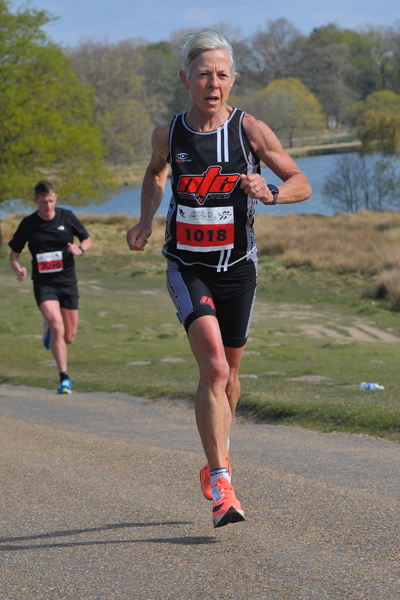 Having to dig deep in the last few miles was an unpleasant experience but one I am familiar with, as was the panic feeling coming into the long home straight realising the course measured long and not being confident of my finish time as a result!

Anyway, finish I did, and in a new record of 1hr 24 mins 31s, over 6 minutes faster than Elaine's previous record. Phew, another record achieved, two to go!

Thank you to everybody for the messages of congratulations, it means a great deal to have my clubmates rooting for me.