I had been quite nervous about travelling with a bike for the first time and competing on such a big stage.

I made it out there ok with my bike, found somewhere to store it (my hotel at the last minute said bikes weren’t allowed in the building) and found my way around the city with reccies of the bike and run courses and swim in the river.

Then there was heavy rainfall affecting the quality of the river water and we were told that the race might be converted to a duathlon.

There was a nervous wait overnight but we found out all was fine and it would be a triathlon, hooray!

The nerves had settled on race morning and I wanted to go out there and enjoy myself, do my best and finish.

It was a mass start touching the pontoon with all the women in my age group.

The horn blasted and we were off. I had started wide to avoid the washing machine and then got on some feet out and around the buoys.

I swapped feet at one point after realising that I kept inhaling and taking on water because the lady in front had a very splashy kick.

The transition was interesting too. As well as being nearly 1km long it was on the first floor of a car park and included climbing 40 steps on entry and running down the exit ramp with my bike!!

I also had to remember to keep right and overtake on the left the opposite of what I am used to and this was being enforced by technical officers.

I had just missed the main pack for my age group but manage to ride on and off with a couple of other ladies and gave it my all and got around safely (there were a number of crashes).

The run was out and back along the Lachine canal and, with the temperature climbing and the sun out, it was a hot one.

I got into a good stride and just tried to hold the pace pouring water over my head at each aid station and trying to catch the next person ahead, especially if they had F45 tattoo - my age group - on their left calf.

Just before the final turn into the home straight I caught two ladies in my age group, I decided to go for the overtake but then round the corner, the finish seemed a long way off.

I had to give it my all in case one or both wanted to try and catch me.

I had support from people I met out there, which was fantastic and sprinted as hard as I could to finish.

Those 400 m sets with a 100m sprint finish at track definitely helped!

I came 21st out of 59 in my age group in a field of talented of world athletes, and was more than happy with that.

Then there were the Mixed Team Relays 🏃‍♂️🏃‍♀️🏃‍♂️🏃‍♀️🇬🇧! 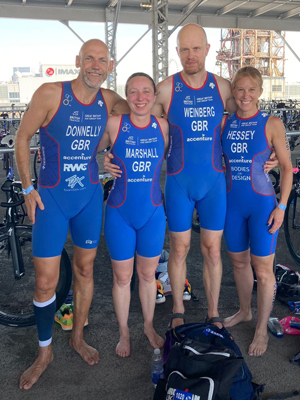 It was fantastic to take part in this inaugural event, but it was absolutely BRUTAL!

Full-on flat-out racing in 27-degree heat and blazing sunshine on heavy legs from racing the day before.

The teams and order were selected by British Triathlon.

I was the 'B' person and finally got to meet my teammates the day before, I just had to make sure I recognised them at the tag points.

The swim was fast out to the buoys around them and back but was more like 350 than the 300m it was meant to be. I was glad I went with the wetsuit.

Then it was back up the steps into transition and down the ramp again and onto a 1 lap bike course again with many twists and turns.

Then back in up the ramp and out on the run for the fastest mile I could run before handing over to my teammate.

The paddling pool full of ice at the end was much appreciated and much needed.

I was part of a great team who all raced hard and fast and we came 8th/28 in the 40-49 category and was the 2nd British team.

I met some more great people and it was great to share the experience with them and I hope to see them again at another race in the UK or abroad.

I want to say a massive thank you to Ian Smith for coaching me🙏, there’s lots more to come especially on the downhills😆, but I also want to thank all the other NTC coaches, activators, bike and run leads, committee and club members.

The club is a fantastic place for the support, advice and camaraderie and you all play an important part in it and make it such a great place to train. Thank you. 🙏